In the days before the Winter Solstice 2011, I was fasting in a hut in the Laos jungle, and on the day of the Winter Solstice, a beautiful woman came and led me to a feast celebrating the birth of a child in the village, revealing how in touch Laos is with the  annual cosmic cycle of death and rebirth! 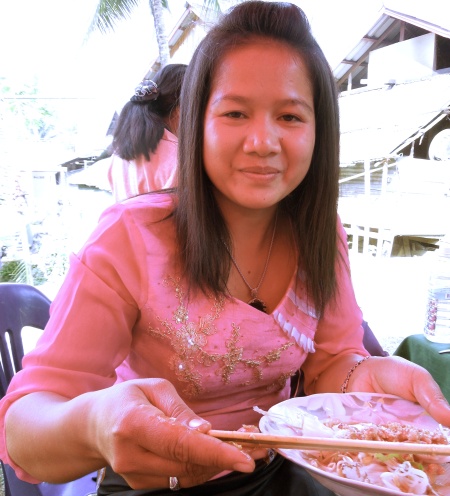 The Aquarian Goddess embodied in the women from Laos…

A year later, it is clear that time I spent at the Vanvisa Waterfall, which I renamed Aquaria after my rebirth experience in the village.

Living the 13 Moon Calendar, I  surrendered to the Aquaria at the Waterfall
at Vanvisa outside Lupang Prabong in Laos.  Here I am wearing the magnificent
national costume of Laos made by Vandara, owner of the
Waterfall at Vanvisa.

This year, I had the darkest Winter Solstice of my life, as I have been in Berlin, with diminishing light due to its location so far north on the European continent.

The view from my window in Berlin — Kunsthaus Tacheles. Originating
as a department store, it became a Nazi torture center, and after the Wall fell,
it transformed into an arts center. It was closed in September 2012, a month
before I moved across the street, leaving it as a silent profound relic of the
power of creative transformation for the New Berlin.

I have spent the past week on a semi-fast, channeling energy day and night, sending healing vibrations to Newton, a town I used to visit prior to meditation circles celebrating the Moon cycles in Danbury.  From what I gathered from press reports, it seems  that tragedy was the result of the repressed feminine energy blocking a conscious understanding of the cycles of life death and rebirth.

Aquarian Jose Arguelles was the visionary who foresaw the 2012 apocalypse as an opportunity for a massive change in orientation by way of the universal adoption of a Thirteen Moon Calendar, where the polar opposites of masculine and feminine would finally come into balance.

By 1993 we knew we had to get serious with promoting the Thirteen Moon Calendar, and so we gave birth to the World Thirteen Moon Calendar Change Peace Movement. We saw the calendar change as the perfect opportunity to declare world peace, call for a universal cease fire, begin a disarmament process and also call for a work stoppage so as a species we could begin to shift priorities. My optimism comes from the fact that in less than a decade the use of the Thirteen Moon Calendar has spread to some 54 countries and the Day Out of Time has become very widespread as a Planetary Festival of Peace and Culture. The previous calendar change movement was a top-down thing. We knew that our efforts had to be a people’s revolution. Bob Marley sings, “It takes a revolution to make a solution,” and that’s so true. If enough people from many different countries and cultures are already following this calendar, then when we got to the point of notifying the world leadership it will be backed up by the people. Not that we haven’t already presented this to the U.N., the Vatican, and many other top leaders. But that has been a matter of course. If we hadn’t done that we wouldn’t be doing our jobs. Of course the Vatican chose to conceal our information and ultimately ignore it. Kofi Annan, however, did give us a positive letter of support. But of course, no one wants to take personal responsibility. So we say, that’s OK, show us a better, more comprehensive solution. We are ready anyway, and everyone who knows that this is real and true is getting ready to say goodbye to the Gregorian calendar and its self-fulfilling apocalypse in 2004 and walk right into a time of peace and harmony. If the rest of the world wants to join, it is an open invitation. Leave the old time and enter the new time. It is the only sure way to rise above the numbed-out nihilism of the decade without a name. Besides, the Mayan prophecy says that 2012 is the end of the cycle, and if we want to get there in one piece, we have to shift gears now. Believe it or not, to paraphrase Crosby, Stills, Nash and Young, I know we will “get back to the garden.”

This is due to the emergence of the magnetic Aquarian Age Goddess…who is EMBODIED under the yod configuration ruling the Winter Solstice 2012, and emerges under the Spring Equinox 2013.

However, the lasting effect of the world’s focus on December 21, 2012 and the focus on the Mayan mythology surrounding the Great Year beginning at the Sun’s alignment with the Galactic Center, a new understanding and appreciation for the cycles of life/death/rebirth.  This is the basis of the paradigm shift from mechanistic linear thinking.

From now on, your life is what you make of it!

…which culminates with the Aries line-up for the Spring Equinox!  It happens at dawn in New York City, where the Sun is ascending on the eastern horizon to join the Mars/Uranus conjunction reinforcing the power of personal initiative to make changes that will impact the world.  The mystical power of the Yod configuration, which is like a cosmic tuning fork (shown in the green triangles in the charts),  is balanced by the physical embodiment commanded by the Saturn and Pluto mutual reception.    This means the change will be deep, at the structural (Saturn) collective body and soul (Pluto) level, and the Moon in Cancer opposing Pluto in its natal house means the feminine energy will take form in the culture!

This is going to be a wild three months!!

The cosmological configuration points to a massive change in the human vibration, providing access to a multidimensional reality, which means the quantum leap is finally happening in the mass consciousness.

The change is taking place on the cellular level, within the human DNA and our task is to make space for Her arrival…

#hieroshiva is the brand for the multimedia products created by Dr. Lisa Paul Streitfeld, a Kulturindustrie theorist and media philosopher of the Hieros Gamos View more posts